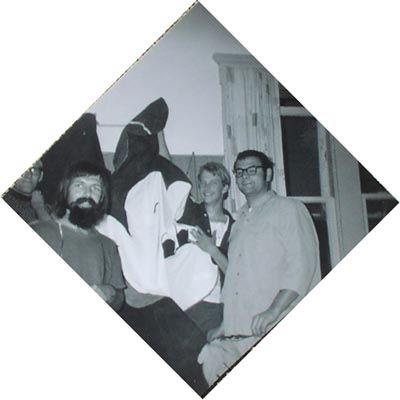 On Sunday, April 12, 1970, a small group of us who lived at Oxford Hall, just off the UC Berkeley campus, made a Mickey Mouse out of sheets and attached it to the face and arms of one side of the Campanile. The photo on the left is a recent one to show the face of the Campanile on which the mouse was attached. The photo I took to the right shows four of us holding the mouse just before Ray Ellis, 2nd guy from the right, put it up.

And below is how the mouse looked the next morning as shown in The Oakland Tribune.

Click on the following links to see both photos and articles about the stunt as they appeared in the San Francisco Chronicle, The Oakland Tribune, the Los Angeles Times, and The Daily Californian (which shows a workman getting the Campanile back to normal and mentions that the campanile bells were playing the Mickey Mouse song). Since it was carried by the Associated Press, articles may have appeared in other papers also.

The climber who attached the mouse to the clock was Ray Ellis, the blonde guy in the back. He hid in the clock tower until it was closed, climbed the stairs to the top with all the equipment, then rappelled down the clock face. I remember Ray as being one of the most brilliant people I had ever met.

Second from the left is Joe Helmer who was the artist and source of inspiration for the effort. To the left, half cut off in this photo I took, is Ken Brill, who became a Foreign Service Officer and Ambassador to Cyprus and subsequently to the IAEA and the UN Office in Vienna.

I do not remember the name of the guy to the right. Other people were involved, also. Someone loaned a Mickey Mouse watch, which Ray photographed and turned into a slide. The slide was then projected onto a sheet and the work began.

Fortunately, no one was hurt and no one got caught. Sadly, the wrong glue was chosen, it was not water proof, and it rained that night, so by the morning, the one hand of the mouse had already begun to come off the clock.

To read about another Mickey Mouse/Campanile escapade, visit "The Campanile and Other Clocks" on this page which is one part of A LOAFER'S GUIDE TO THE U.C. BERKELEY CAMPUS, an extensive history published by Carolyn Dougherty.

This is the concert featuring the Rolling Stones, The Jefferson Airplane, Crosby, Stills, Nash and Young that took place on Dec 6, 1969 and is famed for the violence that occured. I did not witness any of the violence, being so far back in the crowd of over 300,000 people. It is described in this Wikipedia article. Below are 3 photos I took of the crowd. Click on any of them to get the full size, full resolution version.

Being Teargassed By A Helicopter

National Guardsmen were lined up in front of Sather Gate. A bunch of us were standing in front of them singing songs like God Bless America. That is, literally, all that was happening. Off to the left was outdoor seating, metal chairs, for a campus restaurant. The National Guardsmen began putting on their gas masks. Suddenly, a large military helicopter came over, spewing teargas from canisters beneath, flying over us and the campus hospital. We bolted, knocking over chairs as we ran.

That night Governor Ronald Reagan was on the news saying the helicopter and tear gas were needed to protect the National Guard from chair wielding, rioting students. The newscamera panned across the knocked over chairs, some distance away. My impression is the television network media has not become any more accurate in 35 years.

Being Taught By The Unabomber

About 1995 I got a call at the office from my wife. She said the FBI was trying to get hold of me and to please call their number. Turns out that as a graduate math student I had taken a class from Ted Kaczynski the last quarter he taught at Berkeley. The FBI had the records of my enrollment and had tracked me down. I told them I would be glad to come in for an interview as they requested, but in fact remembered almost nothing about him. For some reason, I remembered a conversation the next quarter with a friend who had gone to highschool, Virginia Tech, and Berkeley with me in which we remarked how abruptly Kaczynski had quit teaching. The FBI decided it was not necessary for me to come down to their office.

For some reason that now escapes me, several us decided that in opposition to the Cambodian/Vietnam War we should shut down the Oakland Bay Bridge. To minimize risk, we decided the best way would be to have our cars stop in the middle because they ran out of gas. I did not have a car, but helped someone else determine exactly how many miles to the gallon his car got, drove across the bridge keeping very close track of how many miles it was from Oxford Hall to the middle of the bridge, then the night before the stunt emptied the tank and measured back exactly the amount of gasoline we would need.

It worked perfectly for us. We did end up running out of gas and blocking a lane. The police were on us in no time, threatening us if we did not move the car immediately. The driver started the engine and for one heartstopping moment it turned over, but then died. So the police bought our story and did not arrest us. I presume today we would be incarcerated without trial, charges, or access to attorneys as terrorists.

Since we did not coordinate with anyone else, the gesture was completely ineffective.

Falling Off A Cliff

I took a trip along the coast with 2 guys. At one point we stopped to look down at the seashore, saw a path that led to the beach cut into the sandstone cliff, and began going down it. The width of the path kept getting more narrow until we could go no farther, still way above the shore.

We knew we had to head back up and at that instant the path where I was standing collapsed and I fell down to the bottom (I remember distinctly thinking "Shit", fainting very briefly, hitting a ledge, sliding and then falling further to the rocky ground).

The other guys thought I was dead, while I carefully wiggled my toes and fingers to see if anything was broken. Turned out my wrist was broken and later found out one vertebra cracked but healed ok with no problems. The other guys got back to the road and got an emergency, volunteer police team to rescue me. I looked like a hippy and one of the rescuers said "So what do you think of us pigs now?"

I went to the Berkeley hospital, where the vertabra problem was identified and my wrist taken care of.

I grew up as an "Army brat" - my father was in the Army specializing in military intelligence focused on Sino-Soviet affairs. I lived in many places growing up: Taiwan, California, Georgia, Kansas, North Carolina, but mostly Virginia since almost every other tour of duty my father came back to work at the Pentagon in Washington, D.C. I was born in Williamsburg, Virginia.

I graduated from Hammond High School in Alexandria, Virginia in 1965 and began school at Virginia Polytechnic Institute (aka VPI or Virginia Tech) in the fall of 1965. To help pay for college, I enrolled in a "work-study" program in which I went to school for one quarter of the year, then worked for a quarter, then back to school for a quarter. In my case, I worked at Oak Ridge National Laboratories in Oak Ridge, Tennessee, employed by Union Carbide Corporation. I learned and did computer programming working for Dr. S.T. Thornton, who was kind enough to include my name on a paper published in November, 1967: "A FORTRAN PROGRAM FOR RELATIVISTIC KINEMATIC CALCULATIONS IN TWO-BODY NUCLEAR REACTIONS"

I, along with two good friends, Bill Meeks (who also went to Hammond High School) and Ted McGavin, transferred from Virginia Tech to Berkeley in Spring quarter, 1968. The reason we transferred is that the Dean suggested that perhaps Va Tech was not the right school for us. I believe we had participated in a strike against the school cafeteria over the quality of food. At any rate, we were all in the same physics class with a professor, Dr. W. Peter Trower, who had graduated from Berkeley and often talked about how great it was. At Berkeley I lived in the University Student Cooperative at Oxford Hall until I graduated in 1971. In spite of what all of the above seems to imply, the Oxford Hall newsletter gave me the title of "Most Conservative Hippie" at the end of the year, which was pretty appropriate.

After having been at Berkeley for about a year or so, I dropped out, smoked marijuana, ate hashish brownies, ushered at the Orpheum Theater for the play Hair. Decided smoking marijauna was just as stupid as smoking cigarettes would be, gave up drugs, then returned to school as a Math Major. I put myself through school by continuing the student work-study program I had begun at Virginia Tech, working some quarters at Marshall Space Flight Center, then later at Berkeley Space Sciences Laboratory, Peerless Electric factory, and Goddard Space Flight Center. I graduated and worked in Germany as a laborer shoveling sand on development projects. After months of that, a close friend, Jenny Ryan, flew over and we hitchhiked around Europe for a few months.

My favorite memories of my time in California are none of the above. They are of backpacking in the Sierra Nevadas, which was unbelievably beautiful and serene. Dale Flynn invited me to join him on my very first trip, for which I am forever thankful. 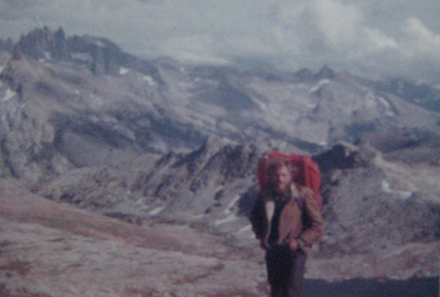 In this photo from that very first backpacking trip I am standing at the pass above Blue Lake as we entered Yosemite Park from what is now called Ansel Adams Wilderness. The Minarets of the Ritter Range are the distinctive jagged peaks in the upper left. Bench Canyon descends down from Blue Lake. This was taken in September, 1969. If you have GoogleEarth installed, then go to this link to see a 3D view of Blue Lake pass. I found a letter I wrote from Oxford Hall to my parents right after that trip which described the trip in detail.

I returned for a backpacking trip with my family in 2003 and again with our son and a friend in 2007, when we lost a camera I hope some kind soul will find and return to me.

I also liked the flautas and guacomole at La Fiesta on Telegraph Avenue, which was still there in the fall of 2008 and still making excellent Mexican food. [I am sorry to say, that by 2012 La Fiesta was closed]

Other Websites
By The Author: